skip to main | skip to sidebar

Just Another Laugh For Today 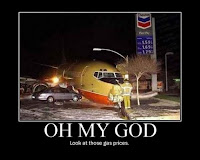 I was REALLY dragging this morning and needed a laugh. Luckily I found it.
Posted by Mike in Texas at 6:26 AM No comments:

The One Statement I Never Get Used To Hearing From Kids

"My contact lens came out."
Posted by Mike in Texas at 8:23 PM No comments:

At Least McCain HAS A Plan

DISCLAIMER: Up until about 5 years ago I considered myself a Republican but after seeing how corrupt the party has become, and how it serves the needs of corporate America rather than the people, I now consider myself an Independent.

There is now way in hell I will vote for McCain, I don't care who the Democrat candidate is. He or she will get my vote.

Everyday the news agencies tell us about the new record prices for crude oil and gasoline. My raise for this year has been erased by increased costs for gas just to get back and forth to work. Something has to be done.

McCain has been ridiculed for his plan to freeze the federal tax on gasoline. Whether the 18 cents would make that much of a difference is hard to say. I'm cynical enough to think the oil companies would just pocket the money.

What has received less attention is his proposal to stop pumping oil into the Strategic Petroleum Reserve. Bush has been pumping oil into it his entire presidency and refusing to release any to ease prices. Currently there are over 700 million gallons of oil in reserve.

Who benefits from all that oil sitting in reserve? The oil companies, since it helps inflate the price of crude. Don't expect Bush or Cheney to do anything to lessen the profits for their oil buddies, who surely see the writing on the wall and are soaking us for every penny they can get while the getting is good.
Posted by Mike in Texas at 7:46 PM 2 comments:

What Is WRONG With Teachers In My Area?

It hasn't been a banner week for teachers in my area, as several seem to have gone totally mad and gotten themselves arrested. Don't they realize it makes us all look bad when they do idiotic things like this?

First, there was the secondary teacher accused of having sex wiht a 17 year old student. Don't they realize it's against the law???

Then, there was the drumline teacher who was arrested and admitted to having sex with a 14 year old girl.

Finally came the first grade teacher who was arrested for providing alcohol to minors, apparently her daughter and her friends. This is one of those cases where I can easily imagine the parent saying, "I'd rather them do it here than out somewhere else".


Their actions bring disgrace upon all of us.
Posted by Mike in Texas at 8:59 AM 3 comments:

How Could They Miss This Song?

A tip of the hat to NYC Educator, who brought us a link to Blender's Top 50 Worst Songs of All Time.

Like NYC Educator I have one I think they missed. How in the world could they not have Gwen Stefani's "Hollaback Girl" on their list?

Why I'm Not Impressed By Merit Pay Schemes

One of the biggest merit pay schemes in the nation is ongoing in Houston ISD here in Texas. Last year's awarding of checks was a debacle, with seemingly no rhyme or reason to the dollar amounts. In dozens of cases teachers who had been let go were given bonuses for the test scores, while others with extremely high passing rates received nothing.

This year's awards don't seem to be much better. Via the Houston Chronicle's School Zone Blog, one top ten recipient from last year dropped from a $6100 bonus to $420. Another teacher who received nothing last year got $7600 this year, without changing his teaching style. One commenter noted that teachers at a school that was rated "Exemplary" for 2 years in a row received nothing.

Meanwhile, of the 251 principals of Houston ISD schools, 232 got bonuses. The superintendent received a 75K bonus, all 19 Executive Principals (maybe someone can fill me in on what that is) received bonuses and all 4 Regional Superintendents received them.
Posted by Mike in Texas at 6:13 AM 2 comments:

How About A Laugh For Your Thursday?

I heard this quote from Dave Attell. I thought it was so funny I laughed out loud.

I got the power to twitch on the ground and crap my pants.

I still haven't decided if I'll use it for good or evil.

Mike in Texas
I am currently in my 15th year of teaching Science and Technology in a small Texas school district.